Using up some more bits

Time for a visit to the Snippets Playground I think, and I can't go empty handed so here is my offering for this week. 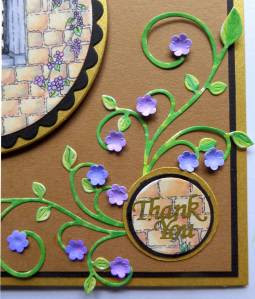 Having coloured some of the white card snippets with purple pens I used them to punch out some flowers and shaped them on an embossing mat. I printed out the image onto another bit of white card and cut with a circle die before colouring the image in with the pens and pencils.

From another snippet of white card I cut the leafy swirl and coloured it with green pens.

Once all my elements were ready I matted and layered as appropriate and stuck to the front of the card. (I used a bit of the image left after being cut with the circle die to make the mat for the greeting). I did not have a gold peel off so I used the gold pen to colour a silver one. 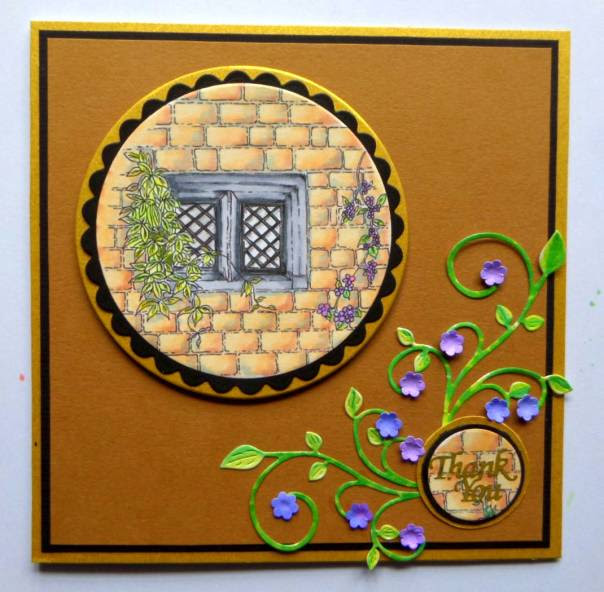 I made this card specifically for a friend who lives in a wonderful part Medieval and part Tudor house with leaded windows. Covet not!

Thanks for dropping in. I am off now to Pixie's Playground. Take care.

Down the Garden Path

This week the Less is More challenge has to include a die cut.  Here is my take on it and an excuse to play with my new Spectrum Noir Pencils.

Using the swirls stencil and Shell Pink ink I dusted ink over the front of an A5 card blank to create a swirly background. I stamped the Cottage Path onto white card with Tuxedo Black and coloured in with the pencils. It is quite hard getting shading in on such a small image but the pencils did help a bit! 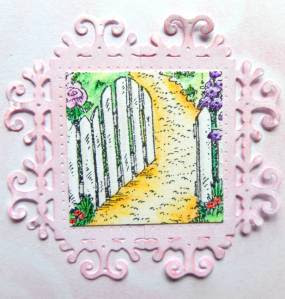 I then arranged my elements onto the front of the card and stuck them down before adding the birthday greeting. 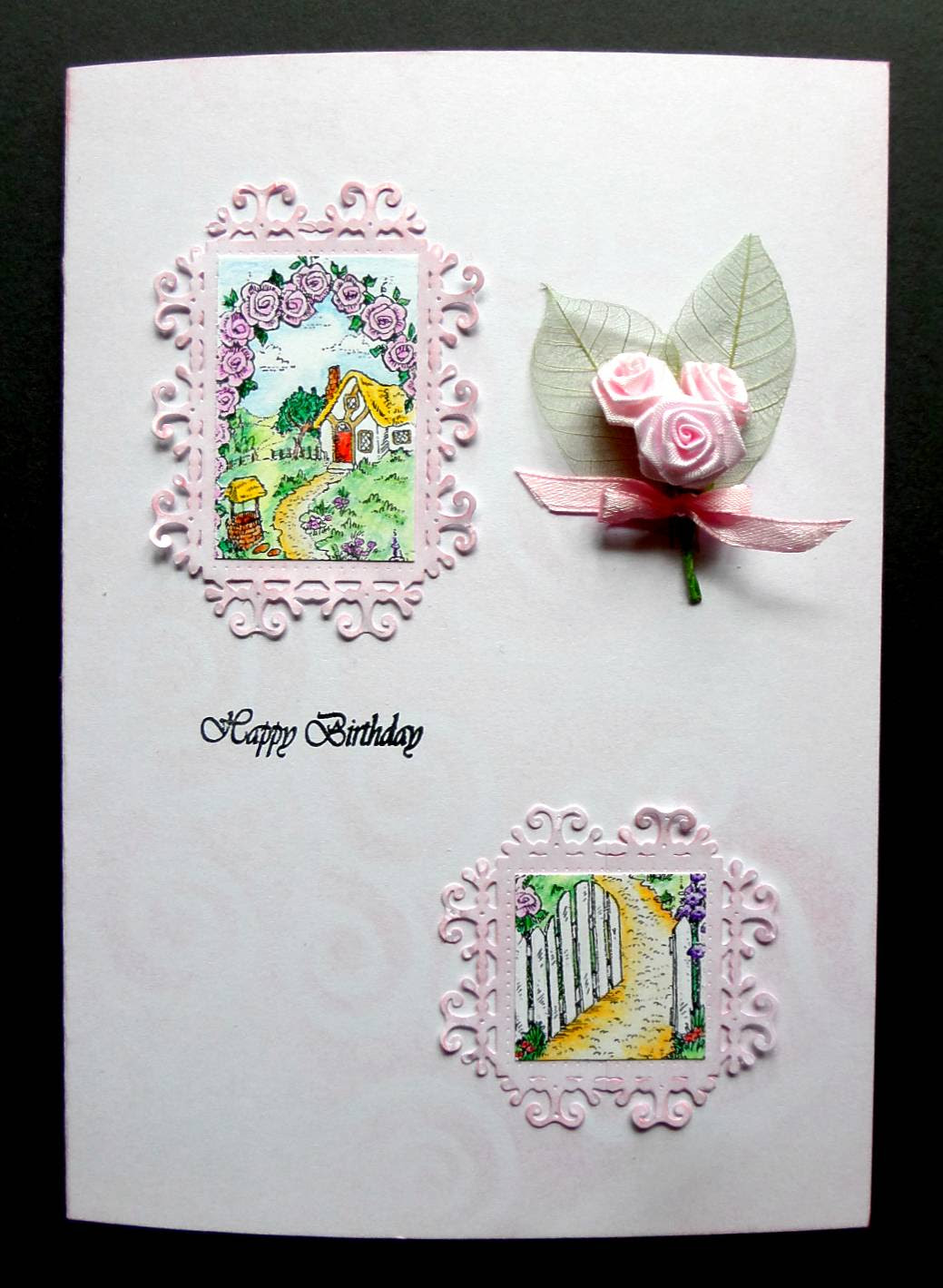 Thank you for visiting. Take care.

I would like to enter this card into the:
Less is More Challenge
Spectrum Noir Challenge
Addicted to Stamps Make Your Mark Challenge
at May 28, 2014 6 comments:

A bit of a tease!

There has not been a lot of action from the craft room for a while now, apart from the occasional challenge entry.  Most of my crafty time has been spent on a project for  the'Crafter's Inspiration' magazine competition.  It is a big project which has taken a lot of time to make not that I am in anyway desperate to win the fantastic prize on offer (of course I am!)  All I can do now is wait for the results to be announced in July to see if I am a winner or not.  I am not sure what the protocol is concerning competition entries that are not sent via blog links or email so decided not to reveal all until the results come out.  But I think I can get away with a sneaky little look ...

Ok, here's a bigger view, quick while no one is looking. It's half term this week so I will be out and about quite a bit.  Hopefully by the middle of the week there may be a chance to play in the craft room and maybe find something to blog!

After my dabble into the vintage quarter I am back on more familiar ground with my card for this weeks Less Is More Challenge - Flowers.   For this one I have combined stamps and dies but used the die to emboss rather than cut. 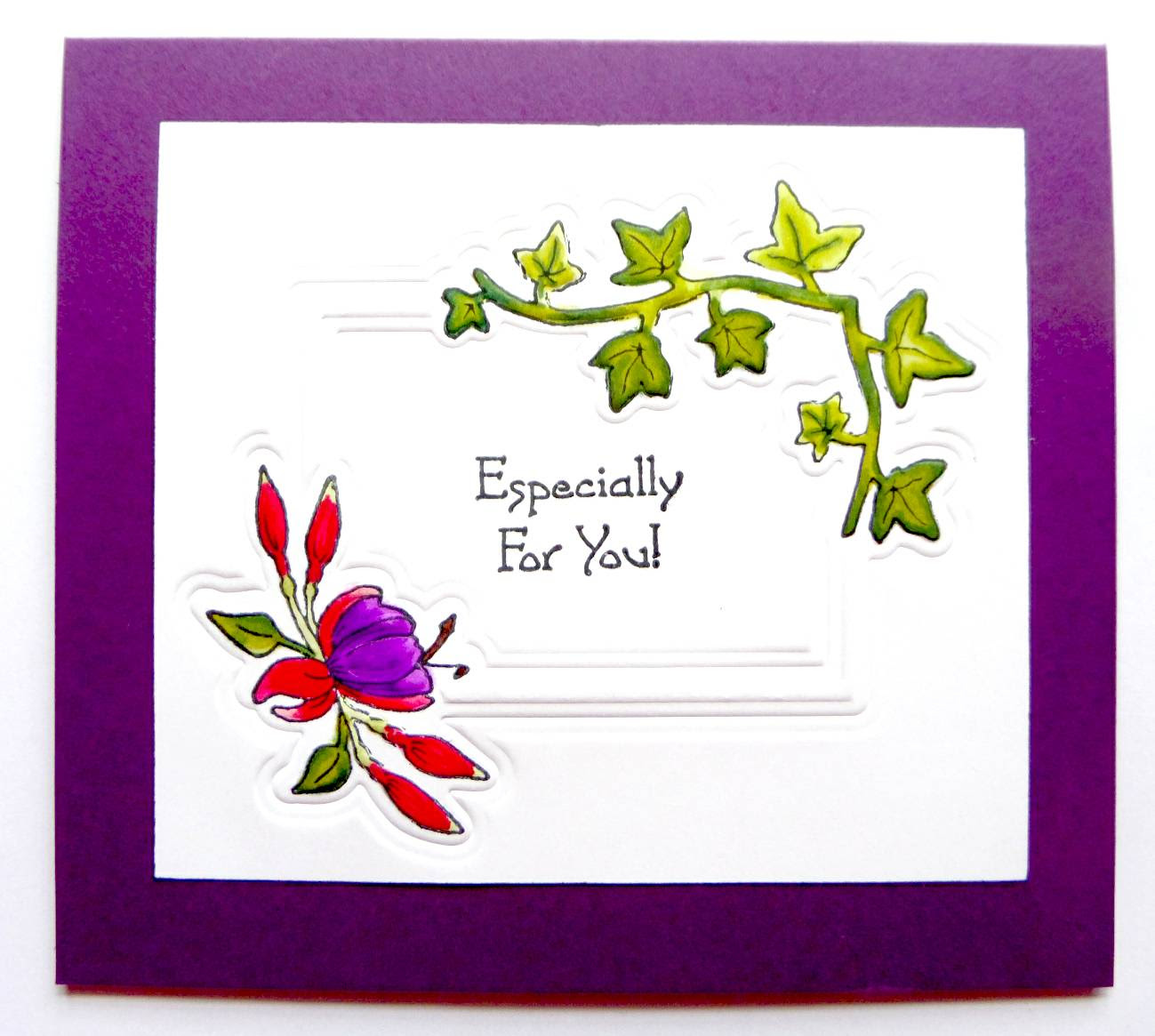 I am off now to Less is More to see what everyone else has been upto!

Saturday was my brother-in-laws 70 birthday and some very good friends had organised a small secret get-together to celebrate.  Of course I had to make a card for the occasion!  I decided I did not want to blast his age out, instead went for something very subtle!

Method:
I stamped the gentleman onto white card, paper pieced his coat and coloured the rest of the image with the pens. I also stamped the banner and words before cutting everything out.

Finally I attached the gentleman and the banner to the card using foam pads then added card candi in 3 corners, 3 small dotty buttons in the 4th corner and a little bow on the left hand side of the card. 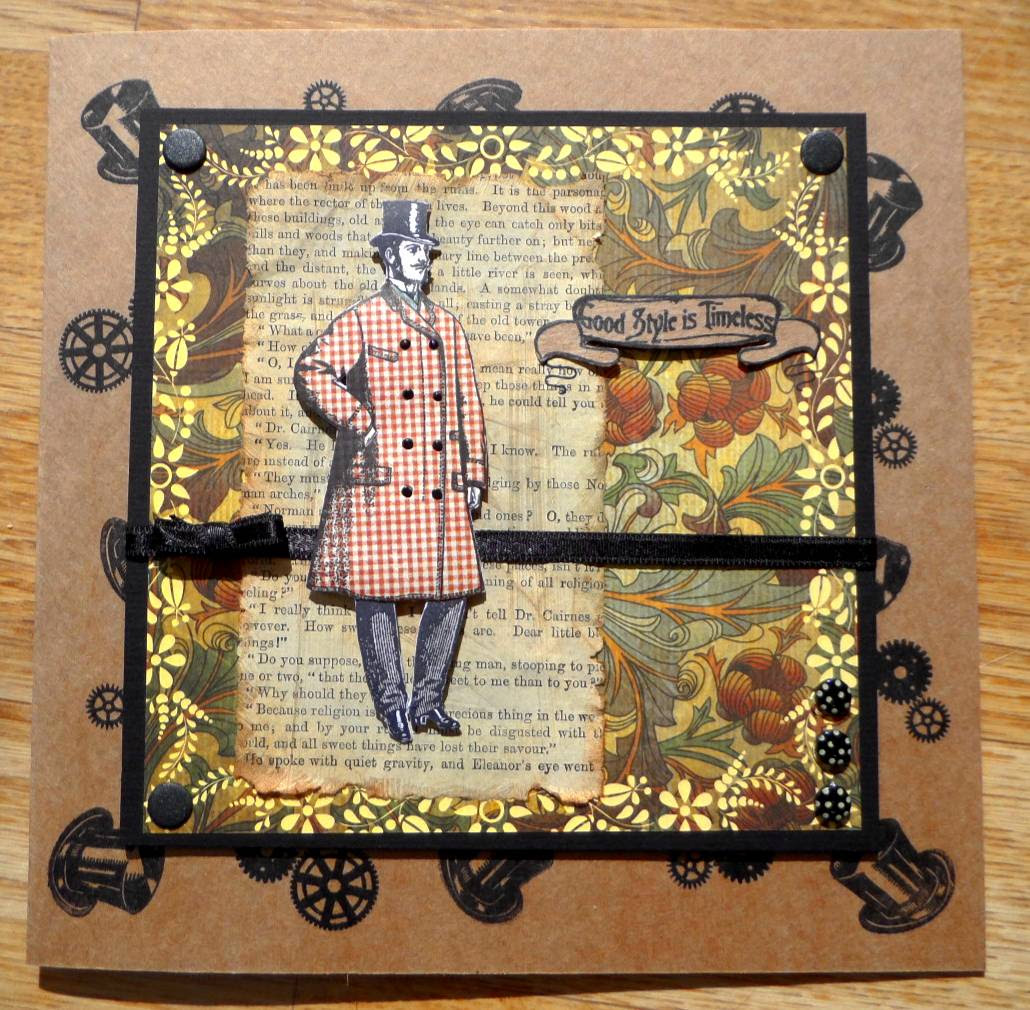 I don't often go for the vintage look but quite liked how this one turned out.

No not a swear word - although I did come very close as will be revealed! Hamantaschen are traditional pastries eaten at the celebration of the Jewish festival of Purim.  Now it just happens that I am teaching  my class about Queen Esther and Purim   in RE. I thought it would be a good idea to make some Hamantaschen for them to try in the next lesson, tomorrow afternoon. Anyone who knows me knows that next to sewing, cooking is not on my list of things I like to do!

Undeterred I printed off a recipe from the internet using the word 'easy' in the search engine!  Well I should have know it was not going to be as easy as I hoped because try as I might I could get no further than instruction 2. (Here is a photo - can you do any better?) 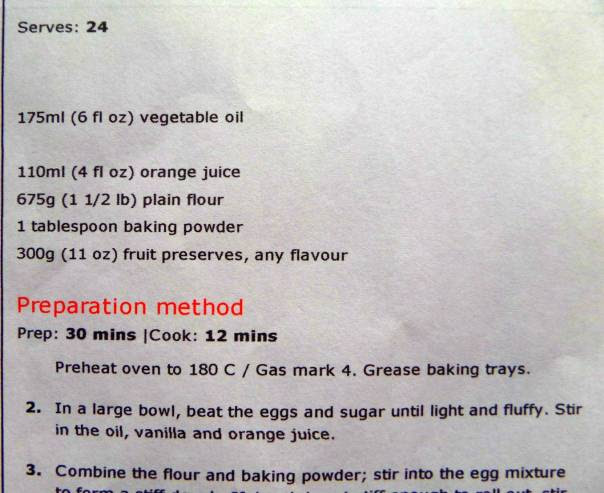 After reading it several times I realised that the problem lay not in my ability, or lack of, to decipher 'easy' recipes, rather in the absence of some of the ingredients. Back to the computer and print out number two.  Still the same problem so I wrote them in.

Returning to the kitchen the oven was by now heated up and ready so I got cracking on making up the dough.  With 31 children in the class I doubled the amounts, filled up the Kenwood bowl and set it to mix the dough.  About half way through my 28 year old machine stopped. No bang, no puff of smoke, it just stopped.  Now I am left with a large bowl full of half mixed, very sticky dough. (You can see now why I came close to swearing and I have only just started this cooking adventure!)Time to get stuck in, literally,  and finish off the mixing by hand.

Some time later I had a dough that I could actually roll out and cut into circles with a cookie cutter.  Things are looking up, I thought. First batch cut, stuffed with jam and sealed into triangles ready for the oven. However the thought of the hot oven must have terrified them and they somehow jumped off the baking tray and onto the floor.

Deep breath and batch 2 very carefully transferred to the oven and cooked successfully. Hurray! On a roll now try batch 3 with a different filling. They cooked beautifully, just one problem all the filling came out leaving empty triangles. (Note to self for next time, if there is a next time after today, honey is not a good filling for Hamanteschen!) 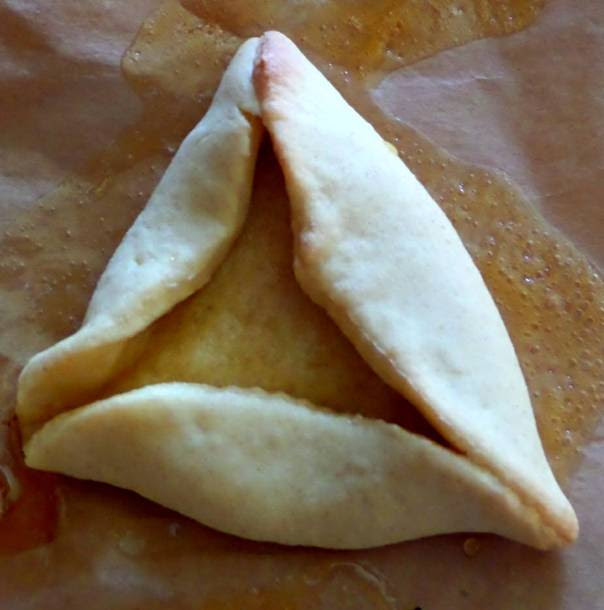 After that things settled down again and the rest of the batches went in the oven, cooked and came out with no misadventure.  All was ok in the end and I had enough for the class and a few to spare.  Think I will put the kettle on now! 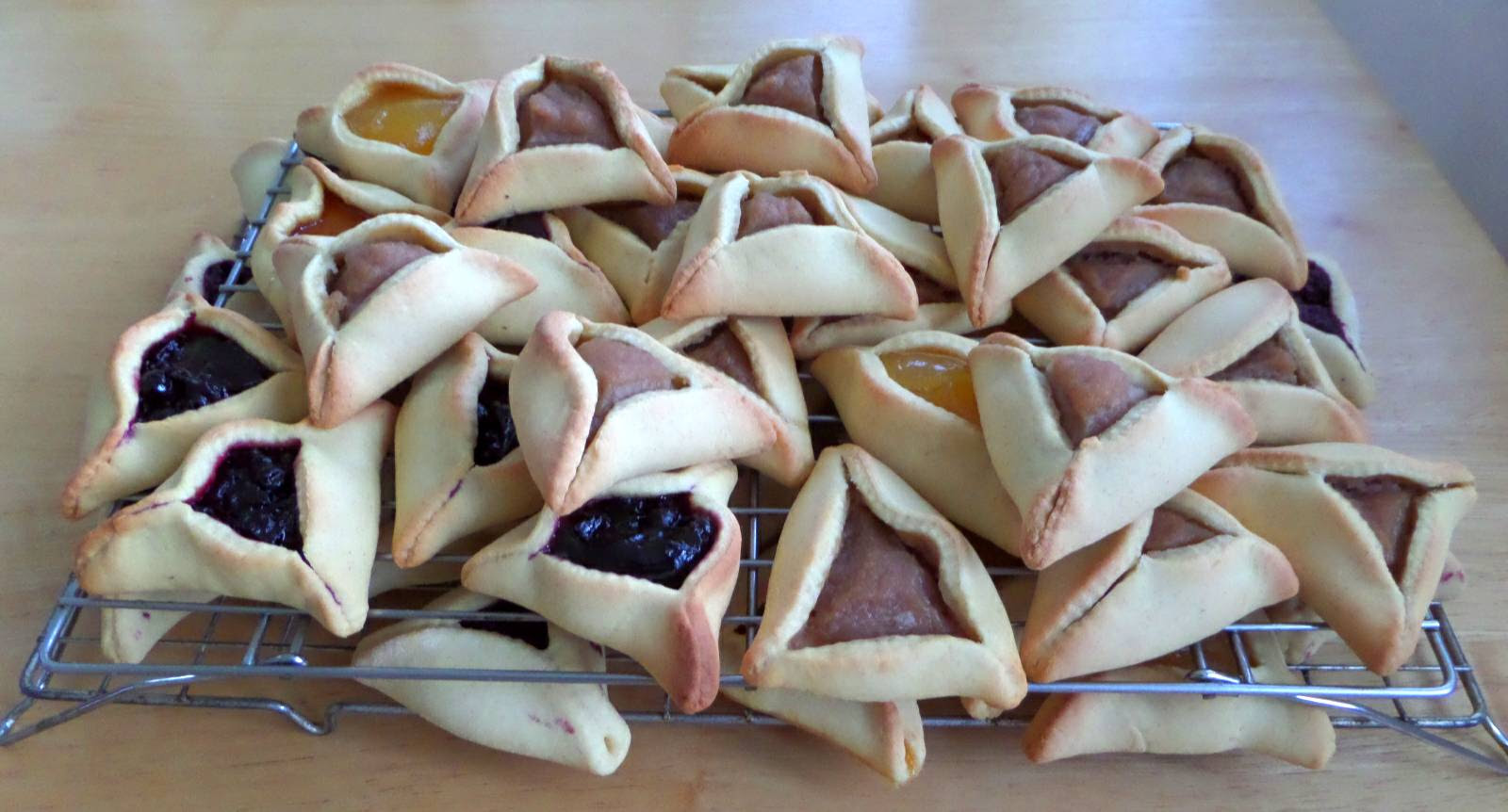 As for my poor old Kenwood, a change of fuse did no good so after all those years of faithful service, despite much abuse, I think it is beyond recovery. I shall be sorry to see it go especially as it was a wedding present from Tim's sister Debbie who died of cancer a few years ago.

I would like to dedicate this blog to all those who, like myself, are challenged in the kitchen!

Thanks for visiting. Take care.

Email ThisBlogThis!Share to TwitterShare to FacebookShare to Pinterest
Labels: cooking

I have been joining in with a Facebook Art Journalling Calendar Challenge this year.  May crept up rather suddenly and with all the busyness of Easter my page was some what late in the creating.  In the end I went for a very quick and simple design.

Method:
Very simple - I stencilled the leaves using the mask and green inks then stuck on the cut flowers. Job done!

With all the snippets I think I might just pop into the playground at Pixie's place and be an early bird for once!

Having got carried away with exploding boxes it occurred to me that they are ok if you are actually going to give them to people but not much good for posting.  I have seen examples of these amazing boxes with all sorts of things attached to them but only recently discovered that they flatten down for posting. Anyway, to get to the point, I decided to have a go at one myself and as I needed a card for my niece's birthday it just seemed the right time! 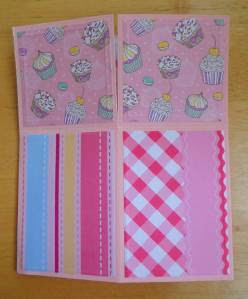 Method:
Once I had found a really good video to guide me, I made the base of the box with the pink card then used various snippets of different papers to cover the panels. 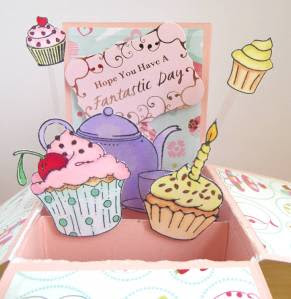 I stamped out a selection of cakes and a teapot then coloured them with Spectrum Noir pens before cutting them out.

Finally I arranged my cake elements how I wanted them in the box attaching two small cakes to acetate strips and making sure they all fitted inside when the box was collapsed. 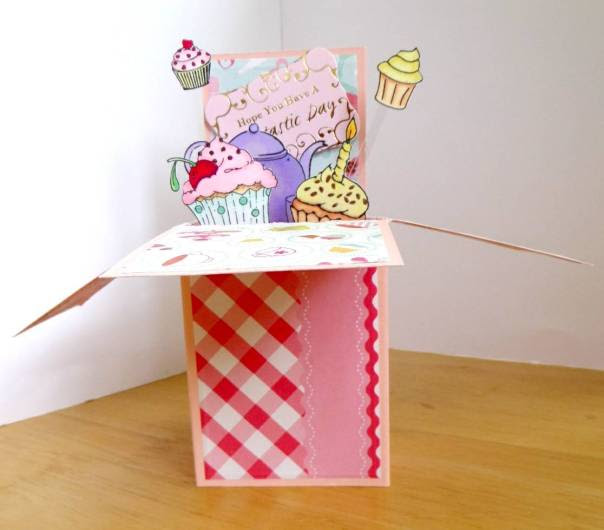 For a first attempt I am pleased with the result, and I managed to use up lots of snippets from my overflowing 'bits' drawer. I think I will head on over to Pixie's Snippets Playground  as I have not been there for a while!

I think I might become addicted to exploding boxes!  This is actually the project I was working on before getting side-tracked by Rudolph.  It is largely inspired by the fact that our topic this term at school is pirates.  Also the currant 'Crafter's Inspiration Magazine' has a competition to win loads of lovely goodies and all you have to do is to produce something using any of the items that came with the magazine kit.  The pirate in the box is a digi stamp that came on one of the CD Roms, as did all the backing papers. 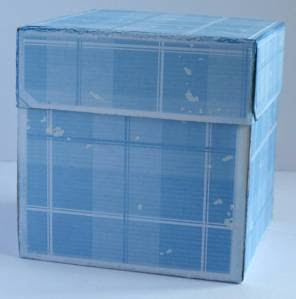 Method:
I printed out the digi stamp and a selection of background papers. Having made up the outer, inner and lid of the box I covered both sides of the larger box and the outer sides of the smaller box and the lid with backing papers having first distressed around the edges. I then assembled the lid. 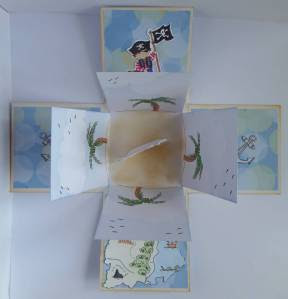 On the inside of the smaller box I stamped the desert island at the bottom of the four flaps, used the cloud mask and stonewashed ink to make the sky, coloured in the trees with Spectrum Noir pens and added birds with a black pen.
the base of the inside box I coloured with various inks to create sand.


I stamped the anchors and the map onto white before colouring them, and the pirate images, with Spectrum Noir pens, then cut them out. I stuck the anchors, the map and a pirate to the inside flaps of the larger box and folded back a flap on the remaining pirate to attached it to the base. 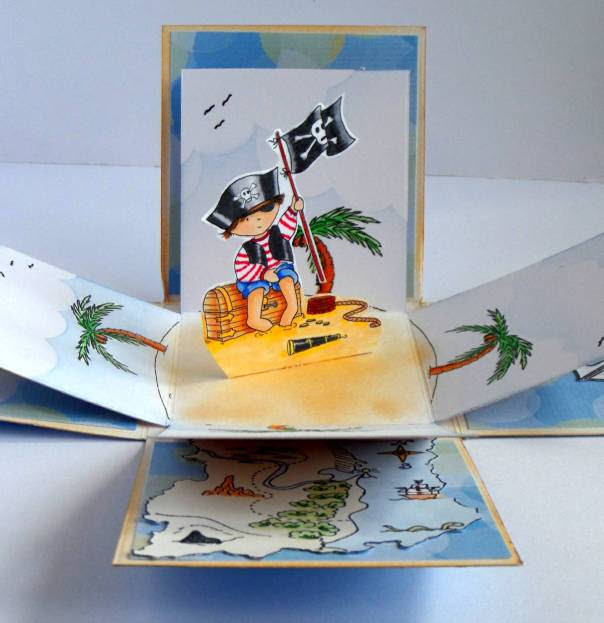