I love horses, but not as much as I love penguins but don't tell any passing horses that! When I was young I did not go in for imaginary friends but I did have a stable full of imaginary horses.  I can even remember that my favourite was called Chestnut but I have no idea what the names of the others were. When Ike had this horse image for her Progressive Challenge I had to make it into a chestnut, it seemed only right. I found a great quote to go with it as well. 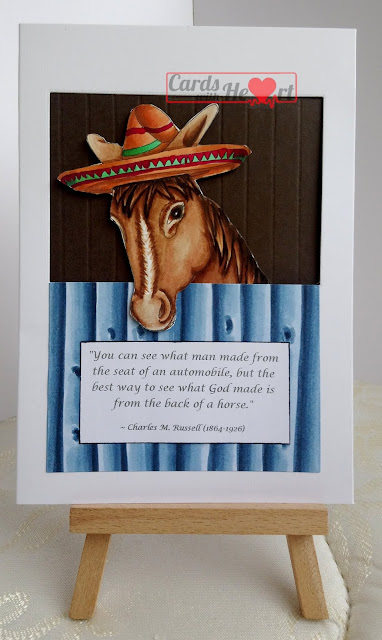 I was feeling really brave for this one and had a go at drawing and colouring the stable door. The dark blue blobs are supposed to be knots in the wood.

I have cut the aperture from the front section of the card and behind it, on the middle part, I have mounted a piece of dark brown card that has been scored to look like the wood inside the stable.

I coloured an off cut of X-Press It card to look like a blue stable door, cut it to size and attached it below the aperture.

Having coloured the horse image I fussy cut him and then attached him behind the aperture using foam pads so that he looks as if he is looking out of the door.

I love the quote I found  so rather than hid it away inside the card I decided to put it on the front.

Did you have any imaginary friends or animals when you were young? I wonder if the children of today enjoy as much imaginary play outside of school or if they get their 'entertainment' from electronic devices.  I hope not, while technology can be very useful there is still a need to let the imagination run wild. It makes me smile when I see children making up stories and acting them out in games of 'Let's Pretend'. It's easier to engage with them when they are not glued to a phone or tablet. If ever the power runs out I hope our children still know how to make their own amusement.

Things you can do with a white flannel (part 1)

I even made use of the tag from the flannel on the back of the card. At this point it is possible that I had been exposed to too much glue!!

In the words of Victor Meldrew 'I don't believe it!' Apologies to those of you who do not know about the British TV show 'One Foot in the Grave'. What don't I believe you ask, well I don't believe it is almost two years since our youngest daughter got married. It only seems like yesterday that I was colouring in endless invitations, orders of service, place name cards, cutting out endless triangle boxes for the favours and scouring all the charity shops for boots for the table decorations.

A bit of research and I found out that the second wedding anniversary is cotton and that's when I had one of my sillier creative ideas, cotton = cotton flannels and so this card was dreamed up. 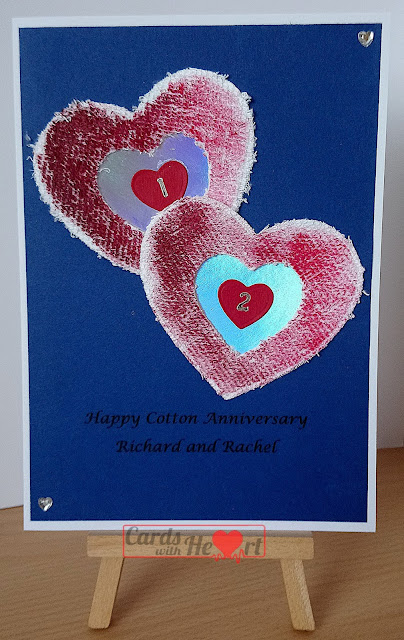 I used a medium sized heart die to cut the shapes out of the flannel. It did take a couple of passes through the Grand Calibur but I think it is more to do with the age of my machine, it is not cutting quite as well as it used to.

Having coloured the hearts with the pens, very carefully so as not to spoil the nibs, I used a smaller die to cut the centres out. I used the size inbetween to cut out silver card to fit behind the appurture I had created and then cut red hearts using an even smaller die.

I printed the sentiment onto the blue card before trimming it to fit the card front. It is the same blue card we used for the wedding invitations and there is still a lot left, I somewhat over catered!! I thought using it would be a reminder of the big day.

Having assembled all the elements and sticking them to the card the final job was putting on the gems and the numbers. 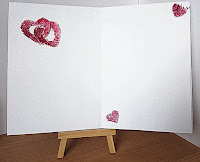 I even made use of the tag from the flannel on the back of the card. At this point it is possible that I had been exposed to too much glue!!

Finally a little reminder of all the crafty fun we had preparing for the wedding.

It's been fun taking a trip down memory lane. Thank you for accompanying me along the way. Take care.

Time to share another progressive challenge make using an image from LeAnne's World 101.

I printed out the image twice and cut out the wand and princess from the second image, using it to 3D decoupage ontop of the first image.

The crown has been coloured in with the Gelli Roll and Posca pens and small gems added to the tips of the point. The pink star is one I have had in my stash for more years than I care to remember! I think it came in a bulk buy when my girls were small for gluing and sticking sessions on wet holidays, the eldest is now 31 so we are talking decades ago! It just goes to show that even bright pink stars have their use eventually.

The backing paper is printed out on paper that has a very fine glimmer to it although the photograph has not picked it up very well.

There is something quintessentially British about cricket and crown green bowling. In my mind the later is the reserve of the more advanced in years, a gentle afternoon activity in the summer sunshine. Oh how wrong was I! There is a growing number of younger people taking up the sport including my niece's fiance at the tender age of 30. This is the card I made for him.

The image and the backing papers are all from the Work and Play #4 collection. The green mat for the image is a piece of  parchment paper printed with a green paper from the Satins collection that I had left over from an old project. The bowler image has been fussy cut and mounted on this piece.

Thanks for swinging by. Take care.