This month the optional theme at Path of Positivity is Encouragement and I thought this story fitted the bill just right.

So many great stories from history are little more than myths or legends, Robin Hood, King Arthur, Merlin, to name a few. There is a lovely story about Robert the Bruce which may never be proved with historical evidence but still makes an encouraging read.

The story goes that having fought the English armies six times and lost six times Robert the Bruce was in despair hiding in a cave. As he thought about whether to continue the struggle against the English or give up his attention was grabbed by a spider trying to build a web across the mouth of the cave. She launched herself off to cast a thread across the cave on which to build her web but fell too short. Six times she tried and six times she failed. Robert watched to see if she would give up as each failure meant a long climb back up to the cave roof to try again. However after six failures she climbed up again for her seventh attempt. This time she successfully crossed the mouth of the cave and had her first thread safely anchored. Now, at last, she could build her web. Robert took inspiration from the spider's unwillingness to give up and went out to meet the English armies for a seventh time. This time he won a decisive victory. The battle was fought at Bannock Burn forever remembered as a defining event in Scottish history. 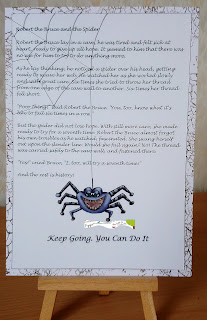 The card blank has been stamped with the crackle stamp using Ground Espresso and the web is drawn it using a black micron pen.

I know there are a lot of people out there who are not keen on spiders so I have tried to made this one look friendly, not easy with the open mouth and teeth!

I hope you will join us on our path this month. You still have a couple of weeks left to get an entry in. Details of the prizes and the link up can be found on the Path of Positivity Challenge Blog.

Thank you for dropping in. Take care.

A quick post today - lots to do! This is the card I made with the freebie image from the Scrapper's Delights Progressive Challenge on Facebook. 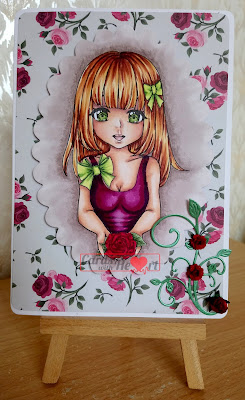 I was fortunate in finding the background paper in my stash, it helped to tie it all together. The roses are made up from red card cut with Britannia rose dies. I found the mini one at a craft show earlier in the year and it works really well as an embellishment on cards along with the next size up. The bigger ones are fine if used on their own as they can dominate any image.

Encouragement on the Path of Positivity

Time for a new challenge at Path of Positivity and this month the optional theme is encouragement. Let's be honest here, we all like a bit of encouragement now and then no matter what stage of life we are at or what we are doing. This time of year is quite a stressful one for our young people with exam season well under way so I thought I would make an encouraging card suitable for anyone facing exams or tests whatever those might be. 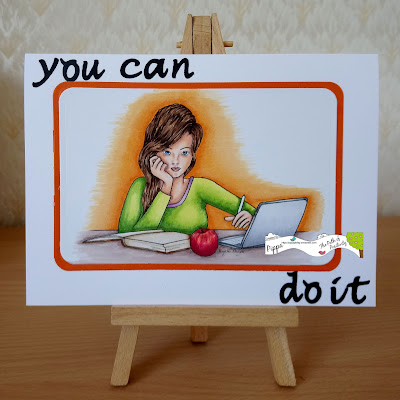 I hope that you will be able to join us at the Path of Positivity this month. Perhaps you know someone who needs some encouragement and can send them a card or gift you have made. All the details of the challenge, how to enter and more inspiration from my fellow team mates can be found at the Path of Positivity Challenge Blog. We have two sponsors offering prizes this month, SheepSki Designs and Scribbles Designs.